After my last post on the farthest distance you can be in Ireland from a road I got thinking on what the situation would be like for other countries. From what I’ve found in Europe, the situation appears to be quite similar, in England it’s 7.6km, (it’s a cached version of the site as it seems to be offline at the moment). So, logic would dictate that the larger the country, the more interesting the answer.

With this in mind I instantly thought of places like Alaska, Russia and Australia. For various reasons (least of which my other half is Australian) I picked Australia. The first problem that I had to overcome was where to acquire the data, there were two reliable sources that I found, the first was Geodata Topo 250k Series 3 data published by the Geoscience Australia, I had to be wary of this as it hasn’t been updated since 2006. This is the data set that is used to create the 1:250,000 scale topo maps of Australia, it was missing a lot of road details in urban areas.

The next data source was the ever dependable OpenStreetMap. The best source for this data is Geofabrik, a German company that has various data formats to choose. I’ve used their website numerous times in the past with great success but this time it would be different because I wouldn’t be dealing with a small country in Europe but the geographic data for an entire continent. As I wanted to reuse the methodology I had used last time for finding the most remote point in Ireland I had to add the Australia Road data from OSM to ArcMap. The easiest way to do this was to download the OSM data in osm.pbf format (Protocolbuffer Binary Format, intended as an alternative to XML). The free OSMconvert command line utility was then used to convert it to .osm format using the following code:

Once this was converted (one of the advantages of OSMconvert is how fast it is, it took 58 seconds) the OSM Toolbox was used in ArcMap (added from here) to add the .osm file to a file geodatabase. This geodatabase is 12.1GB in size. The roads layer was added (1,513,287 features); the roads that would form the basis of this selection were then selected from this and exported to a few feature class. The select statement is below:

I thought long and hard about whether to include or exclude the tracks, in the end I decided to include them because I ran a version of this without them and realised that it omitted public roads like the Canning Stock Route. This is classified as a track and it is located in the northern part of Western Australia and is 1850km long, to put that in European context, that’s about the distance between Dublin and Rome. I then projected the roads to GDA_1994_Australia_Albers (EPSG 3577). I’m no expert in Australian coordinate systems but this seems to be widely used for the country. I then used the Euclidean distance tool to calculate the Euclidean distance for the exported road network. Everything for this exercise was saved in a file geodatabase, this made running the tools faster. Below is an export of the Euclidean distance raster with the road network overlaid. 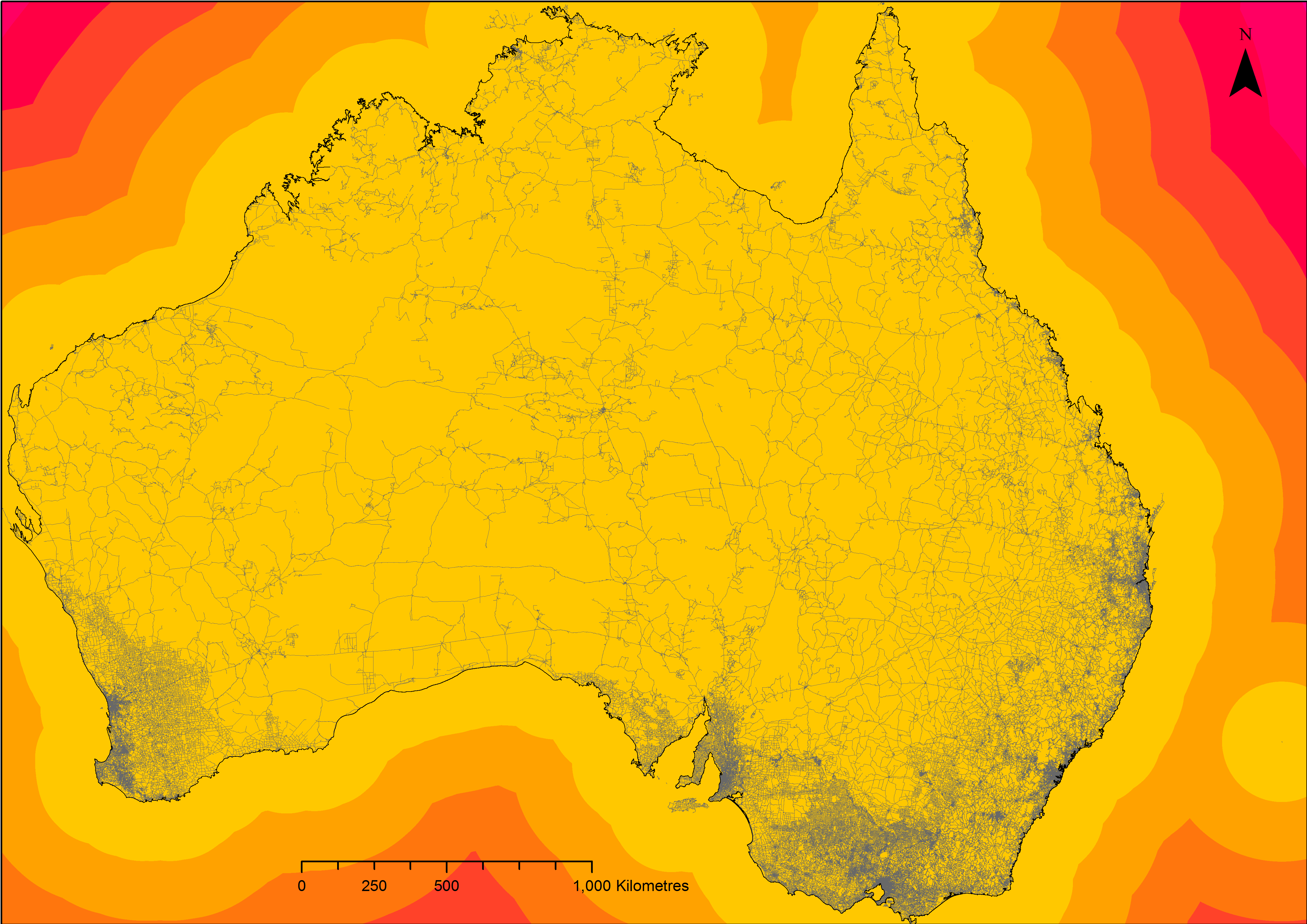 For the purposes of this exercise all of the islands (Tasmania included) were removed. The next step was to use the zonal statistics tool to calculate the max value of the raster. The following equation was then used to result in an output with only one cell value (the maximum distance to a road). This was then converted to a point using the ‘Raster to Point’ tool in ArcMap.

The maximum distance that you can be to a road in Australia is 156km. 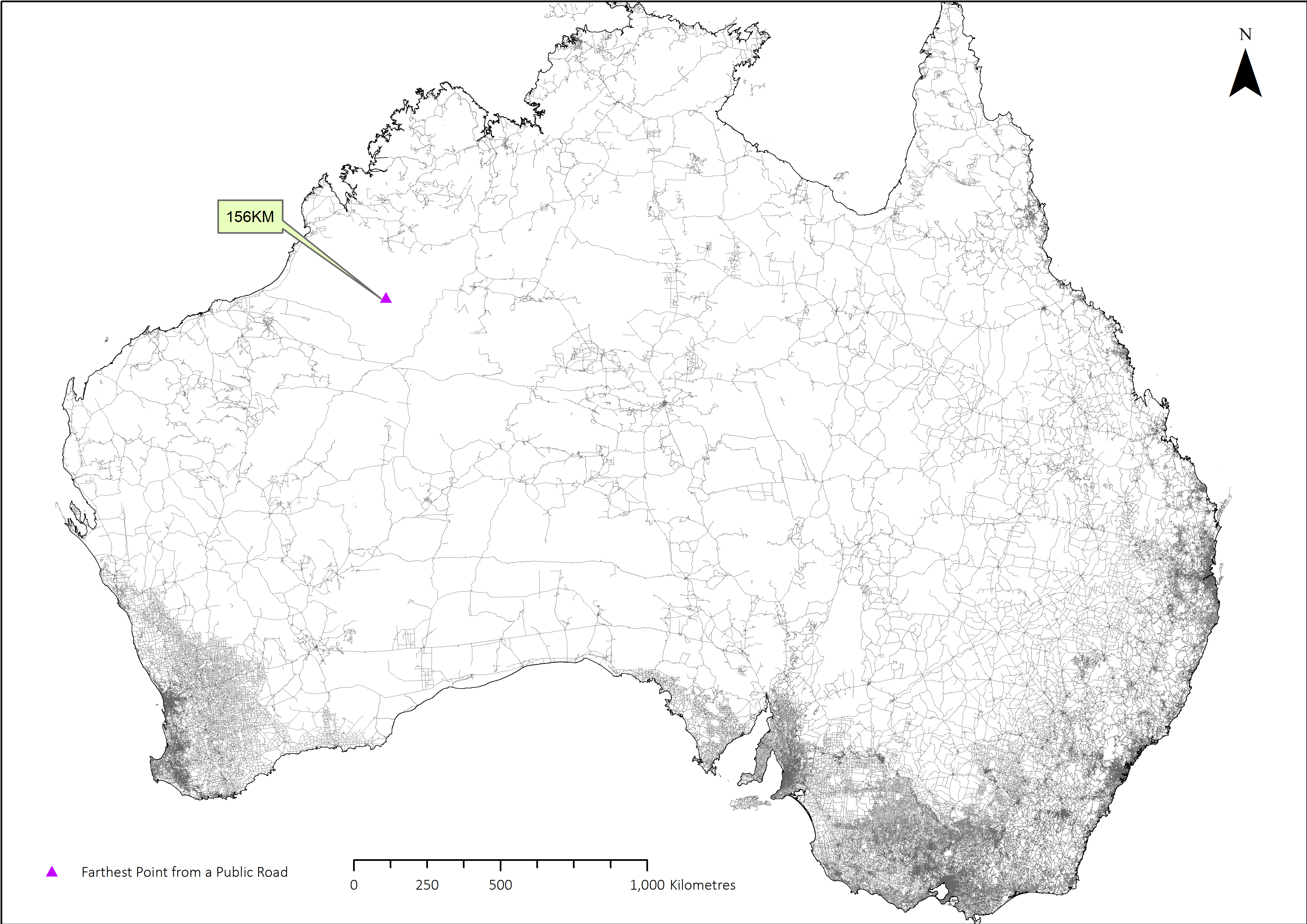 Farthest Point from a road.

The point is located in the Great Sandy Desert. It is the second largest desert in Australia and encompasses an area of 284,993 square kilometres. 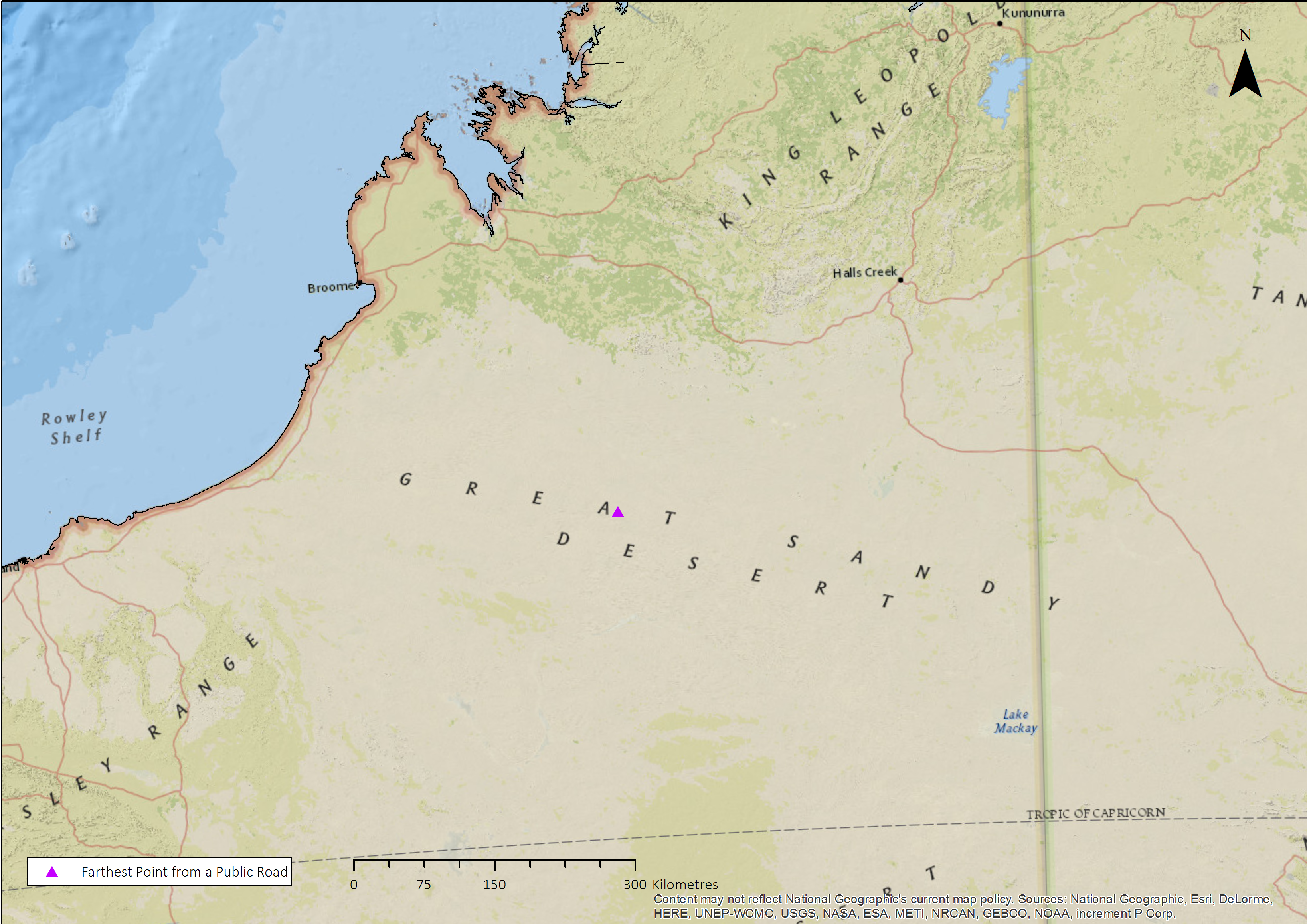 So there you have it, the farthest point you can be from a public road in Australia is almost the distance between Dublin and Galway. Obviously this was just a quick desktop based exercise and has flaws ranging from data quality to the coordinate system used but I think it is useful enough to be a semi-decent indicator of the distance.